The annual meeting of South Dakota Woodcarvers, Inc. will be held on the 17th day of January in the year 2009 for the purpose of electing officers and planning activities for the coming year. The meeting will be held in room 503 of the Ed Wood Trade and Industry Building on the campus of Southeastern Technical Institute, Sioux Falls, between 9:00 AM and 10:00 AM.

Activities and project carving planned for the regular third Saturday meeting will follow the meeting adjournment.
Posted by Arne at 9:11 PM No comments:

Lloyd and his wife, Joy, are long-time Sioux Falls Residents. Lloyd was a State Farm Insurance agent until he retired in 1997. Also, along the way, Lloyd was a body and fender man for seven years, especially enjoying the challenge of spray painting a flawless finish. Joy and Lloyd have six children and eleven grand children, and with the marriage of a grandchild, Lloyd is looking forward to becoming a great grandfather.
Lloyd's interest in working with his hands probably began in the 1930's when he was a youngster growing up and having to make his own toys. After retiring, he and Joy drove their RV to Texas where he was exposed to the art of woodcarving. Taking classes and purchasing a book soon had Lloyd carving elk and deer. Currently he enjoys learning to carve birds. He has taken classes from such notables as Kirt Curtis, Desiree Hajny, and Frank Orthmeyer. (Frank, you are grouped in great company.)
The Center for Active Generations hosts several of Lloyds carving. He gives eagle carvings away to members of his family, and a copy of his wolf and cub was a gift to his brother in Alaska. However, he did sell a blue heron. Big horn sheep and a Kestrel hawk in walnut are carvings proudly completed, and several of Lloyd's carvings have done well in competition at the Sioux Empire Fair Expo and SDHCA Dakota MasterWorks.
Traveling and hunting also interest Lloyd. He has taken big game such as elk, deer, and antelope, and he has crafted his own bow and makes his own arrows for big game hunts. In addition to hunting with his bow, Lloyd has entered state and national competitions. Another enjoyment has been the teaching archery to his grand children. Today, Lloyd has added flying remotely controlled aircraft and using an air brush for special effects in painting his carvings. This fellow doesn't quit! Glad your are with the Club Lloyd! Keep on inspiring us with your many tallents!
Posted by Arne at 9:01 PM No comments: 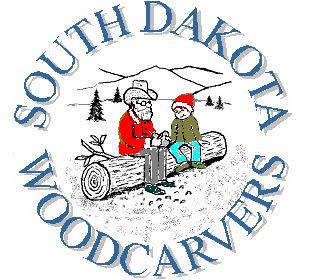 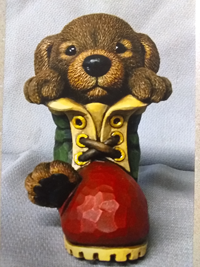