Hats off to Bob Locken!

Thanks to Bob's initiative and willingness to get things done, advertising for our Annual Christmas Show and Sale at the Parkridge Galleria appeared in two issues of the Shoppers News. Even though Bob did not have a table to show off his carvings, either for show or for sale, he paid the bill for the ads and has refused to accept any reimbursement from the club treasurer. Too bad the show had to be canceled because of the weather! We'll probably never know how much good those ads might have done. Thanks anyway, Bob!
News that appeared in a few Internet Events Calendars about rescheduling the show for the next Saturday was completely worthless-- (judging from the few people who showed up that day to shop for woodcarvings). In fact, getting enough traffic at the Park Ridge Gallaria on any given day to make it worthwhile enough to attempt a sale of woodcarvings may be expecting too much--regardless of the amount and type of advertising we could muster. Maybe it's time for a change! (Where have we heard that before?)
The possibility of setting up a booth at the Side Walk Arts Festival next September in down town Sioux Falls was discussed at the annual meeting last month, and Vice Pres. Dick Sabers offered to investigate that possibility. It will be interesting to see what he has to say about that at our next meeting, Feb. 16th.
Who can doubt Paul Harvey?
A new sharpening tool recently advertised by Paul Harvey prompted me to check it out on the Internet web site. They had video demos for two models, the 2000 for $130, and the 3000 for $250. I thought the see-through disk and air cooling features of both models were quite interesting--not to mention lightweight portability. I began to wonder if it would be worth spending that much money for still another sharpening tool.
Then one day I happened to be shopping at Menard's (again) and noticed a large display of the model 2000 on sale for $99.99. I began to wonder if we could get Treasurer Huntimer to part with another $100 and buy one for the club to use at meetings.
A week later, needing still more material for a kitchen cupboard remodel (and to get away from "Super Tuesday" TV), I returned to Menards with a fairly sizable Big Card rebate check. After loading my cart with a sheet of oak plywood, I went to look again at the Model 2000. There was only one left on the shelf and a guy was watching the video. I grabbed the box and said, "Excuse me, I need this for a product evaluation.."
I'll have it available for anyone to try out at our meeting, Feb 16th. There's a link to the website at www.sdwoodcarvers.blogspot.com
~~~Sec. Arne
Posted by Arne at 10:30 PM No comments: Rollin Manning has been a member of our club since 2000. During the 37 years he worked as a meteorologist, ("Weatherman"--for those of you from Nunda), he lived in North Dakota, Michigan, Indiana, Georgia, Arizona, and finally in South Dakota, where he concluded his career. Rollin admits it was frustrating at times, working against all the weatherman jokes, but he was correct 60-70% of the time--which, he said, wasn't all that bad. He retired in 1990. A year later Marian, his wife, joined him in retirement after years of serving as a dietician in hospitals and nursing homes.
Together, they have four children and ten grandchildren, and they spend a lot of time traveling between Tennessee and Colorado to visit family members. From January 10th through May of this year they will be enjoying the warmer weather in Arizona.
Rollin is a late bloomer in carving. His first wood projects were building bookcases for himself and for family. Then he "graduated" (one could say) to carving. Good Move! His favorite projects are bears, birds and other wild life.
Things we don't know about Rollin are that he is a stamp collector and a presidential gold coin collector. A third thing we don't know about him is that he became 81 last June. And forth, Rollin went directly from High School into the Marine Corp. It was the last year of WWII, and Rollin was on his way to invade Japan when the two bombs that brought that war to and end were dropped. Later, as a member of the National Guard, Rollin served in the Korean conflict.
We are glad Rollin survived his adventures in the military and in the weather reporting business to become a fellow wood carver. After retiring from John Morrell & Co., Don Clementson worked as a craftsman for a bank in Brandon. His wife, Marge is engaged in the antique business, buying and selling at a booth in trading shows and through an antique store. When not carving, Don enjoys reading westerns and playing golf, and Marge likes to play Bingo. Don and Marge also enjoy taking their camper to Branson and Wisconsin, where they will stay ten to fourteen days at a time. They have two children and one grandchild.
Since Don joined the SD Woodcarvers Club fourteen years ago, his talent for woodcarving has grown, and he has gained a reputation as one of the area's best, along with Jim Savage and Jerry Bergeron, whose works are well known by art collectors in and beyond the Sioux Falls area. He likes to carve various styles of "Santa" figures and walking sticks, but his favorite carvings are large portraits of Native Americans and Mountain Men. Such pieces have won him several Best of Show awards at the Center for Western Studies Annual Artist of the Plains Show and Sale and at the Sioux Empire Woodcarving Exposition. (His Mountain Man that won the People's Choice Best of Show in 2002 is still pictured in the "Gallery" page of www.sdwoodcarvers.com.) Don usually participates in three art shows a year. One is our annual Parkridge Show and Sale. The other two are out of town sites. Don also participates in competitive shows.
When asked what we don't know about him, Don says that he is "old". Hey, Don! Welcome to the club! Speaking of which: besides growing old with the rest of us, Don's service as a club member has been very commendable. Numerous times he has offered instruction on various projects and served as president for five or more years! Many thanks, Don, for sharing your skills with us and for encouraging the rest of us "carvers".
At last report, Don has won a battle against the cancer that was slowing him down during the past year, but last Jan. 8th as he was getting the mail he slipped on some ice and broke his leg. We wish you a speedy recovery and look forward to seeing you again soon!
Posted by Arne at 10:28 PM No comments: 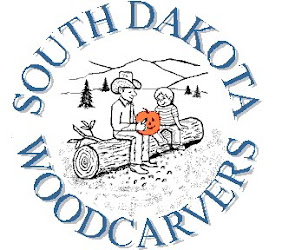