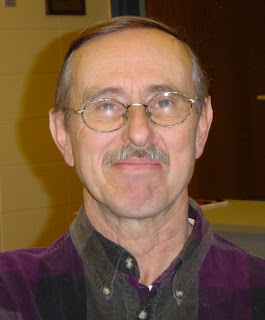 Steve was born in Omaha where his father was a businessman. And later, he grew up in Sioux Falls, his mother's hometown, with three sisters. Sisters live in Sioux Falls and one in Kansas City. For family, Steve has a daughter and a son with both living in the Black Hills.

After serving for thirty years, Steve retired from the Postal Service three years ago. In a walking route, Steve would cover about five miles a day. All that walking set him up for a hiking hobby today, which he shares with his children. In later years of work, Steve drove his routes. When asked if he had any trouble with dogs he answered none. But he did have one good story of a dog, which came out for the mail and carried it back to his owner who was confined to a wheelchair. Smart dog. Good story.

Steve has outdoor hobbies such as hiking, fishing (4 or 5 times in Canada), biking around Sioux Falls, winter cross-country skiing and gardening. Today, Steve lives on a five-acre piece of ground with a house and barn on it. There he tends a garden of vegetables and flowers, and also gets a crop of asparagus.

Past carving projects have been walking sticks for his daughter. Steve got interested in carving from looking over club carving at the local fair several years ago. He was thinking that he would like another hobby. He joined the S D Woodcarvers in 2009, and today he is carving a Dick Saber's bark carving of a hobo.

Today, Steve is fixing up an old hip-roof barn with new shingles and several rooms on the lower level for a shop. He would like to add equipment for carving and some furniture projects. Wild life (the animal and bird kind) is another interest Steve has. Some day he would like to do some animal and duck carving. Steve, be careful on that barn roof!

Welcome to our club Steve. It's good to see you at our monthly meetings.
Posted by Arne at 11:26 AM No comments: 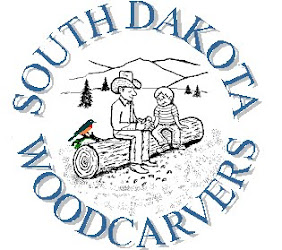